Zaros is a beautiful and picturesque village of Heraklion located 45 km. south of the city, built in a green valley at the foot of Psiloritis and at an altitude of about 450m. The continuous habitation of Zaros since antiquity was based on the existence of large springs with abundant water from where it got its name: Za + rous = a lot of flow.

It is an attractive destination for excursions as it combines areas of natural beauty and rich history, while remaining a genuine and welcoming place, offering the visitor warmth, rest and tranquility.

It is the right destination for the traveler who seeks contact with nature, offering a climate of relaxation and rejuvenation.

In the wider area there are several and some unique attractions where you can visit. Some of them are:

The watermills of Zaros are part of one of the largest watermill systems in Crete and it develops from the springs of the area "Votomos" to the southern exit of the settlement of Kato Zaros. The last watermill in operation of Zaros is the one in Kato Votomos. Chronologically, the construction of all the surviving watermills is placed in the middle of the 19th century, but in some there are traces from older periods, which means that they pre-existed and were repaired and supplemented from time to time.

THE LAKE OF ZAROS (VOTOMOS)

The artificial lake of Zaros or Votomos is located on the southern slopes of Psiloritis, 1 km north of Zaros and 45 km southwest of Heraklion. The lake before 1987 was a small wetland formed by the crater of the Votomos spring. It took its current form in 1987, when the Forest Service rehabilitated the area and created an artificial lake where the spring waters are retained. The name Votomos is known to the Cretans from the homonymous bottling company of one of the most famous waters in Crete, "Zaros". The name Zaros comes from the molecule Za, which means a lot, and the verb reo. "Zaros" means the place where a lot of water flows. From the lake starts the path that leads into the gorge of Agios Nikolaos and ends after about 5 km of walk in the enchanting pre-forest of Rouvas.

THE GORGE OF AGIOS NIKOLAOS

It is the most impressive in vegetation and in its geomorphological formations gorge of Central Crete. Apart from the characteristics of its flora and fauna, the gorge impresses with its morphology. Magnificent geological formations and beautiful ravines compose a rare landscape. Its ecological and geomorphological characteristics, in combination with the existence of the historical churches of Agios Nikolaos, Agios Minas and Agios Efthymios but also the remains of a Roman Aqueduct in the place "Sterna" from where the ancient Gortyna was watered, make it a great natural monument of Crete. It crosses in a north-south direction the imposing South mountain complex of Psiloritis and joins the forest of Rouvas in the north with the valley of the river Koutsoulidis in the south, in the area of Zaros. At the northern entrance of the gorge is the chapel of Agios Giannis where the forest service has formed a forest recreation area. The total length of the route from the chapel of Ai Giannis to Lake Zaros is about 10 km and its crossing takes about 4-5 hours.

THE HOLY MONASTERY OF VARSAMONERO

The Holy Monastery of Varsamoneros is a monastery of the first centuries of Venetian rule, but of which only the church survives today and is located in the village of Vorizia. The monastery during the Venetian occupation was known as Chiesa della Madonna di Varsamonero, meaning the church of Panagia Varsamonero. Although the exact date of the foundation of our monastery is unknown, it probably dates back to the 14th century, the time when the original church, the current aisle of the Virgin Mary, is dated. A prominent figure of the monastery was in the early 15th century. the abbot Ionas Palamas who played a key role in the establishment and dissemination of the cult of St. Fanourios in Crete, whose main center was the Monastery of Valsamoneros.It has even been considered that the first icons of the saint that were narrated by the great painter of Chandakas Angelos Acotanto for the iconostasis of the aisle of Agios Fanourios in the Monastery of Valsamonerou and today are in the monastery of Vrontisiou, were the product of the abbot's collaboration with the painter. Today only the katholikon survives, since the monastery had been abandoned since the 18th century. and is a part of the Vrontisiou Monastery. The katholikon was formed in its current form after successive additions, when in the original church of Panagia, the current northern aisle, the southern aisle of Agios Ioannis Prodromos, the transverse of Agios Fanourios and the narthex on the west side were added.The decoration of these parts of the church was done gradually from the middle of the 14th century, when the frescoes of the aisle of the Virgin Mary have been dated, until the middle of the 15th century, when the addition and the fresco of the narthex were completed.

The Holy Monastery of Vrontisi is a male monastery and is located between the villages of Zaros and Voriza, at the southern foot of Psiloritis, at an altitude of 550 meters, in a landscape with panoramic views of Messara and the Asterousia Mountains. The two-aisled church is dedicated to Saint Anthony and the Ascension of the Apostle Thomas. The monastery is surrounded by a wall, while the gate was destroyed in 1913. The latter was made of marble and had the image of Christ embossed with the gospel. At the outer entrance there is a 15th century marble fountain, with a relief representation of the Protoplasts in Paradise, the Pantocrator and four other figures, symbolizing the rivers of Eden. The bell tower of the monastery is of Italian style and is one of the oldest bell towers in Crete. It is located outside the temple and is covered with arches. The church was frescoed, however few frescoes survive and date from the 14th century. Evidence for the monastery exists in writings of 1400. It seems that after 1500 the Monastery of Varsamoneros began to decline and then Vrontisi flourished. The name is due to its founder, who was called Vrontisis. It is also said that the painter Michael Damaskinos (16th-17th century) was a monk in this monastery.

THE HERMITAGE OF AGIOS EFTHIMIOS

On the eastern side of the gorge, high above the monastery of Agios Nikolaos, we find the location of Kalyves, where Saints Efthymios and Nikolaos Kourtaliotis practiced in the 17th century (around 1670), who for some is the same person. Inside the cave temple there are some frescoes, while there is an inscription with the number 1432, which obviously does not refer to chronology as at that time the chronologies were written in letters.According to tradition, Saint Nikolaos Kourtaliotis was killed by a hunter recruited by the nuns of the monastery of Agios Nikolaos, when one night they saw him wandering in their orchards dressed in animal sheep, thinking that he was an animal. The wounded saint asked the hunter to take him to the place where the church of Saint Nicholas is located today in the gorge of Kourtaliotis. There the hunter was thirsty and the saint, in a miraculous way, opened the current springs of Kourtaliotis to quench his thirst. He was buried at the same place, but his grave has not been found. 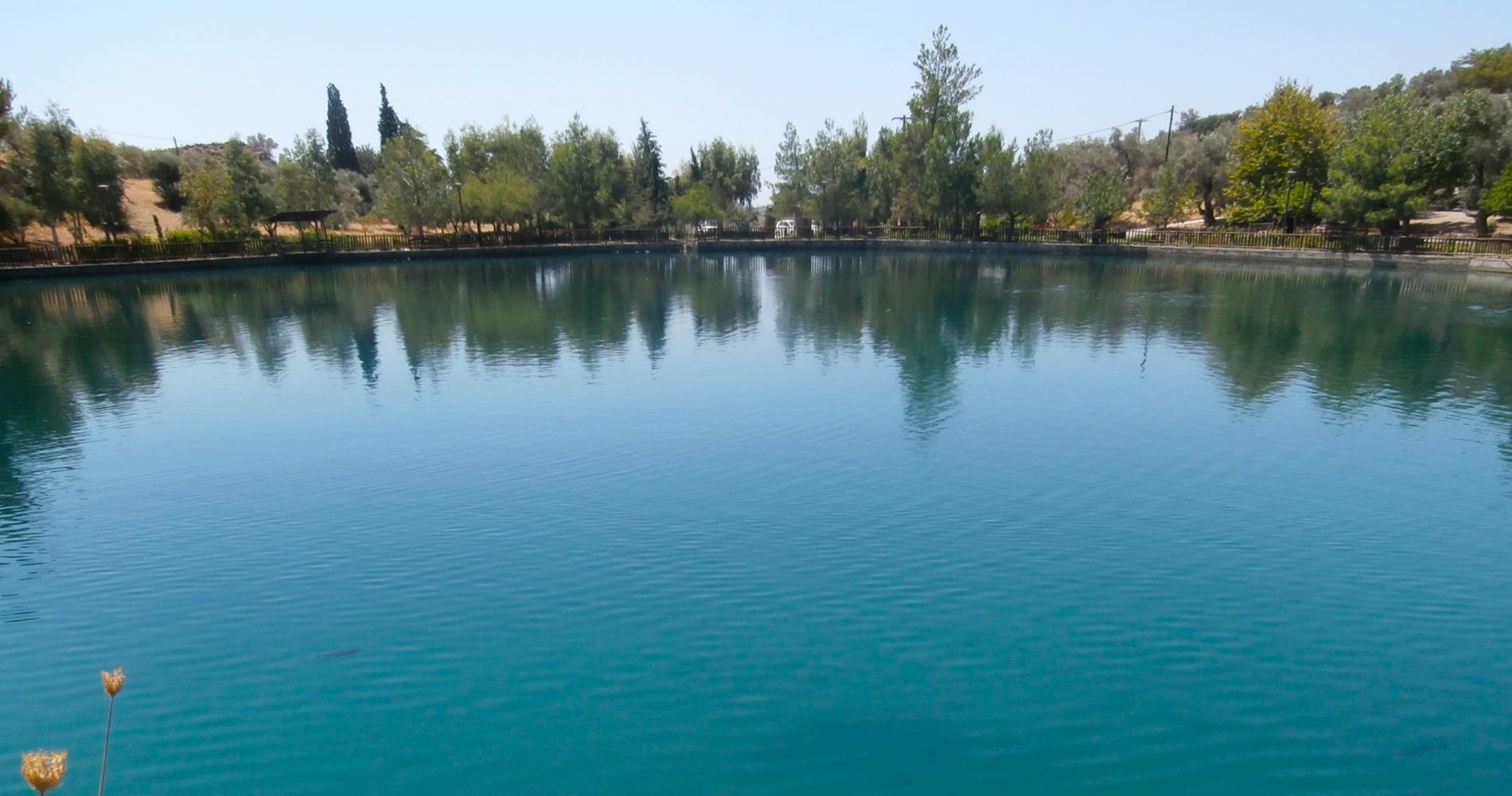 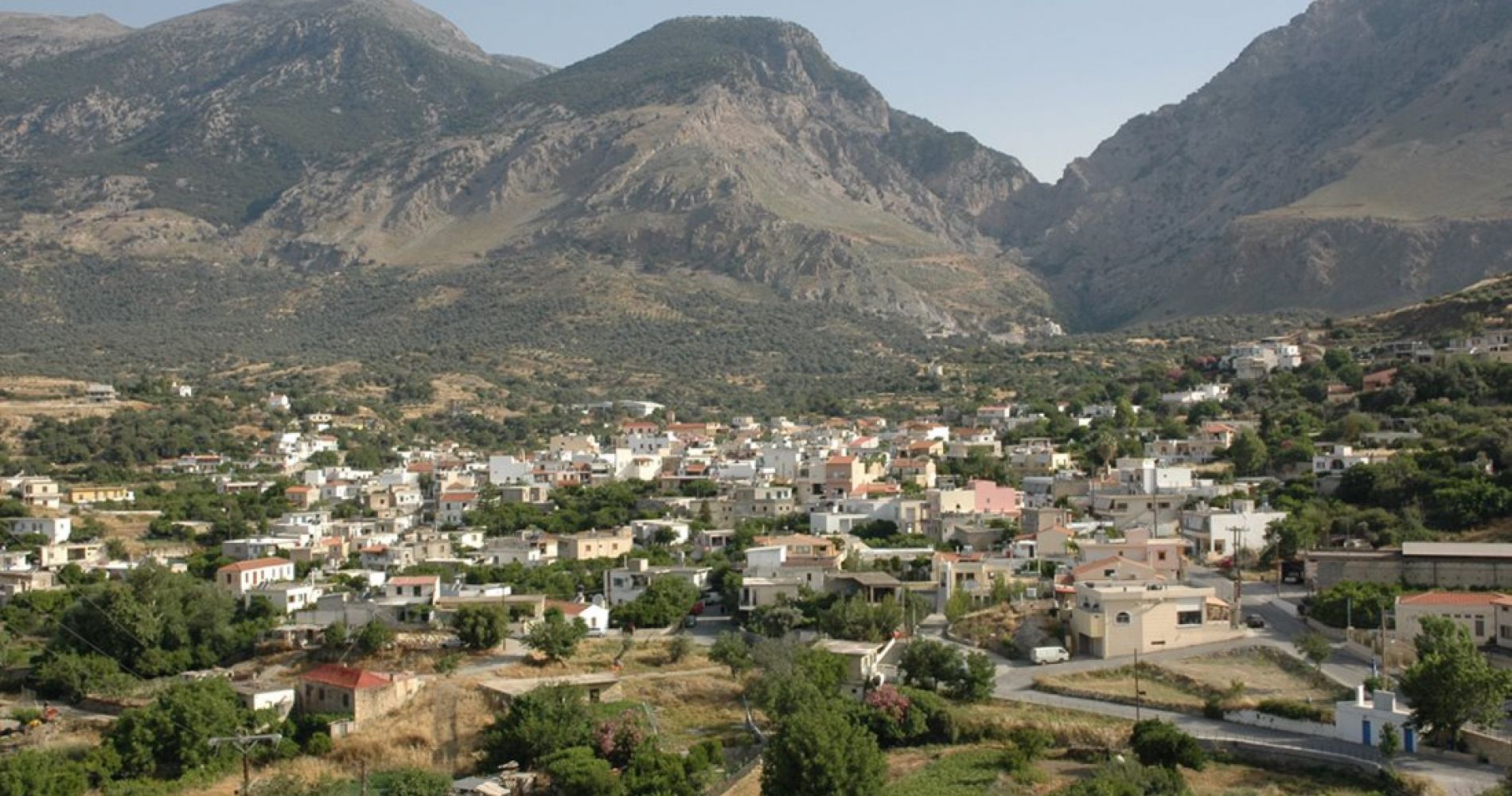 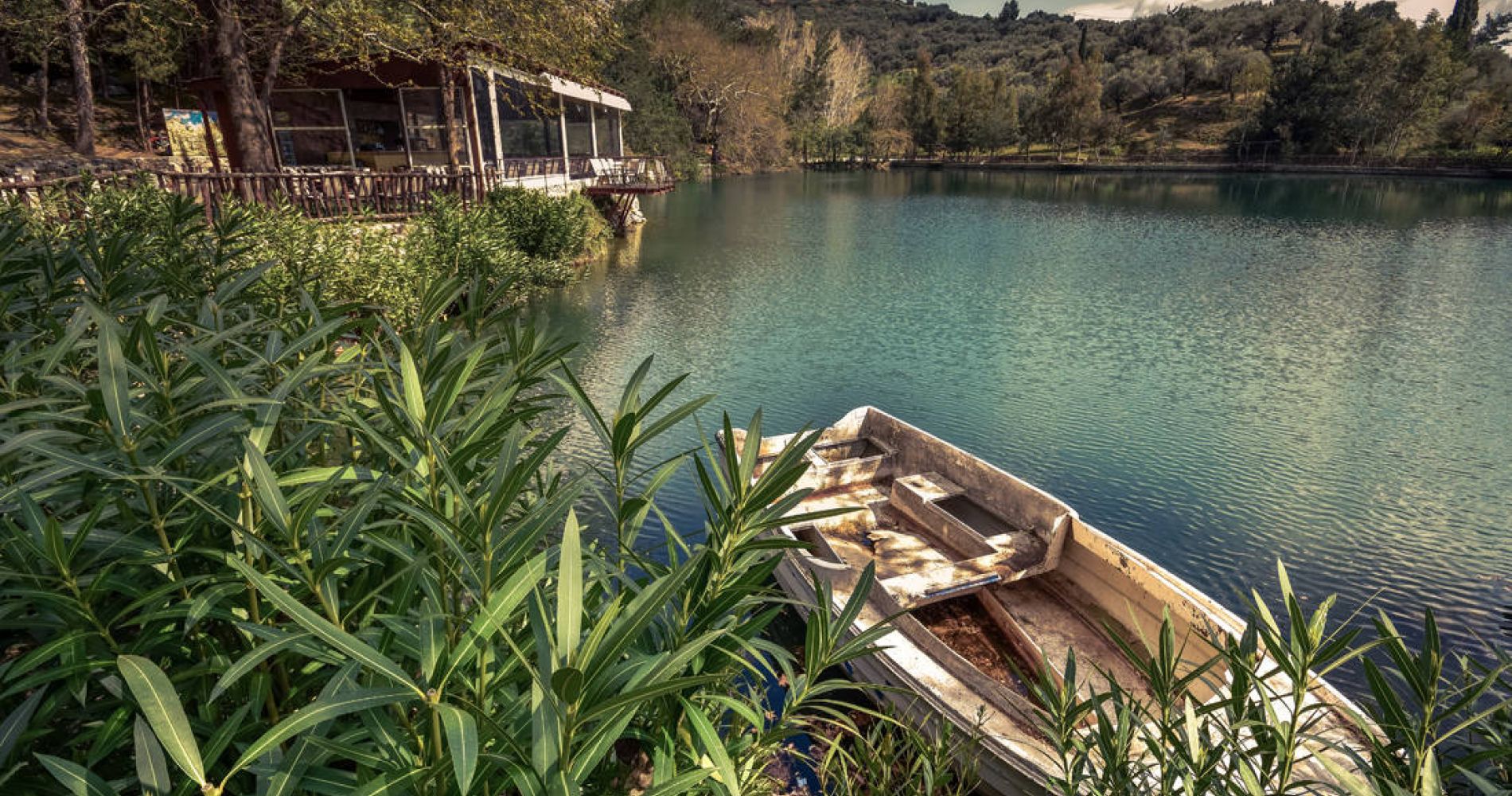 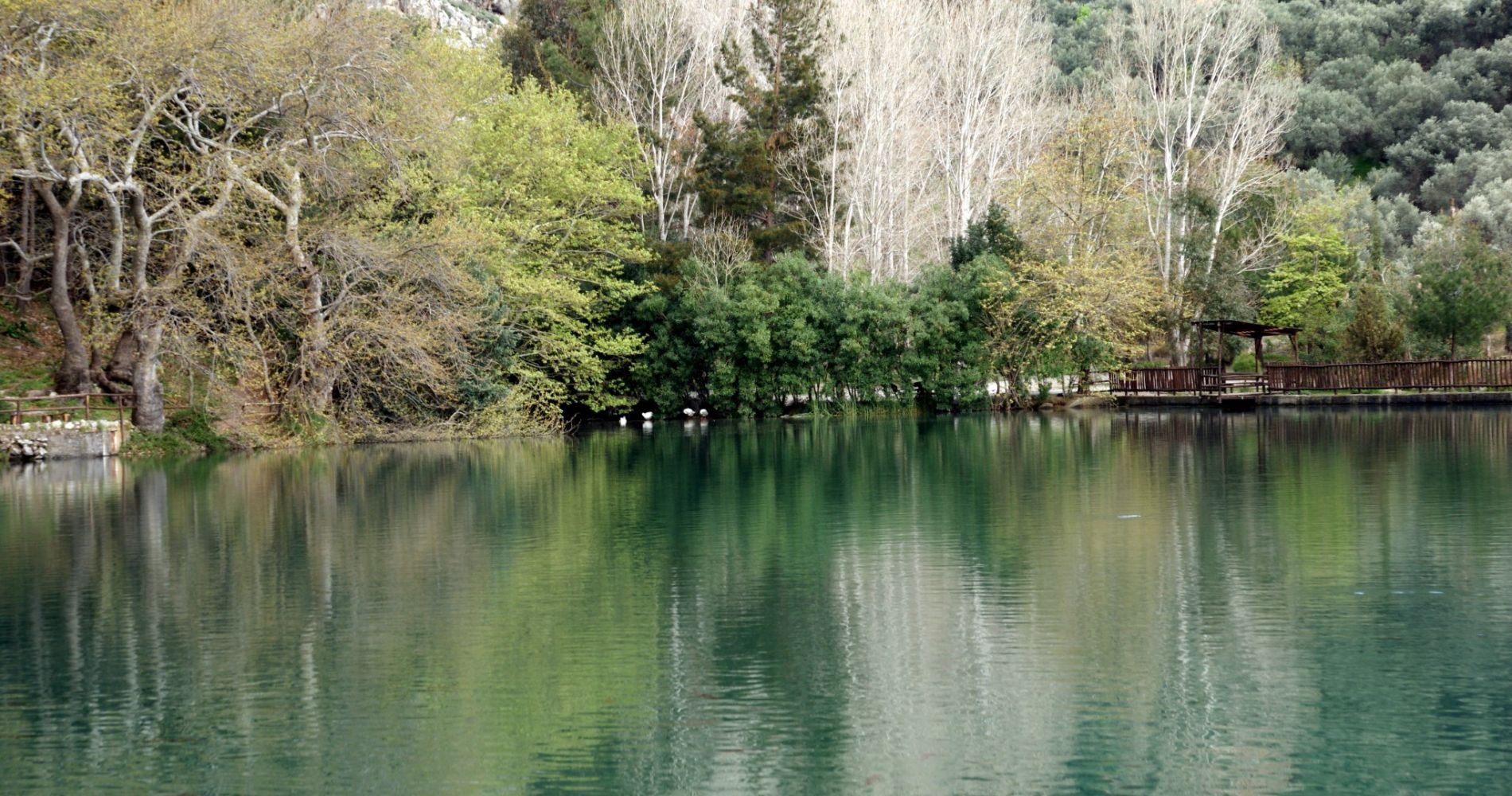 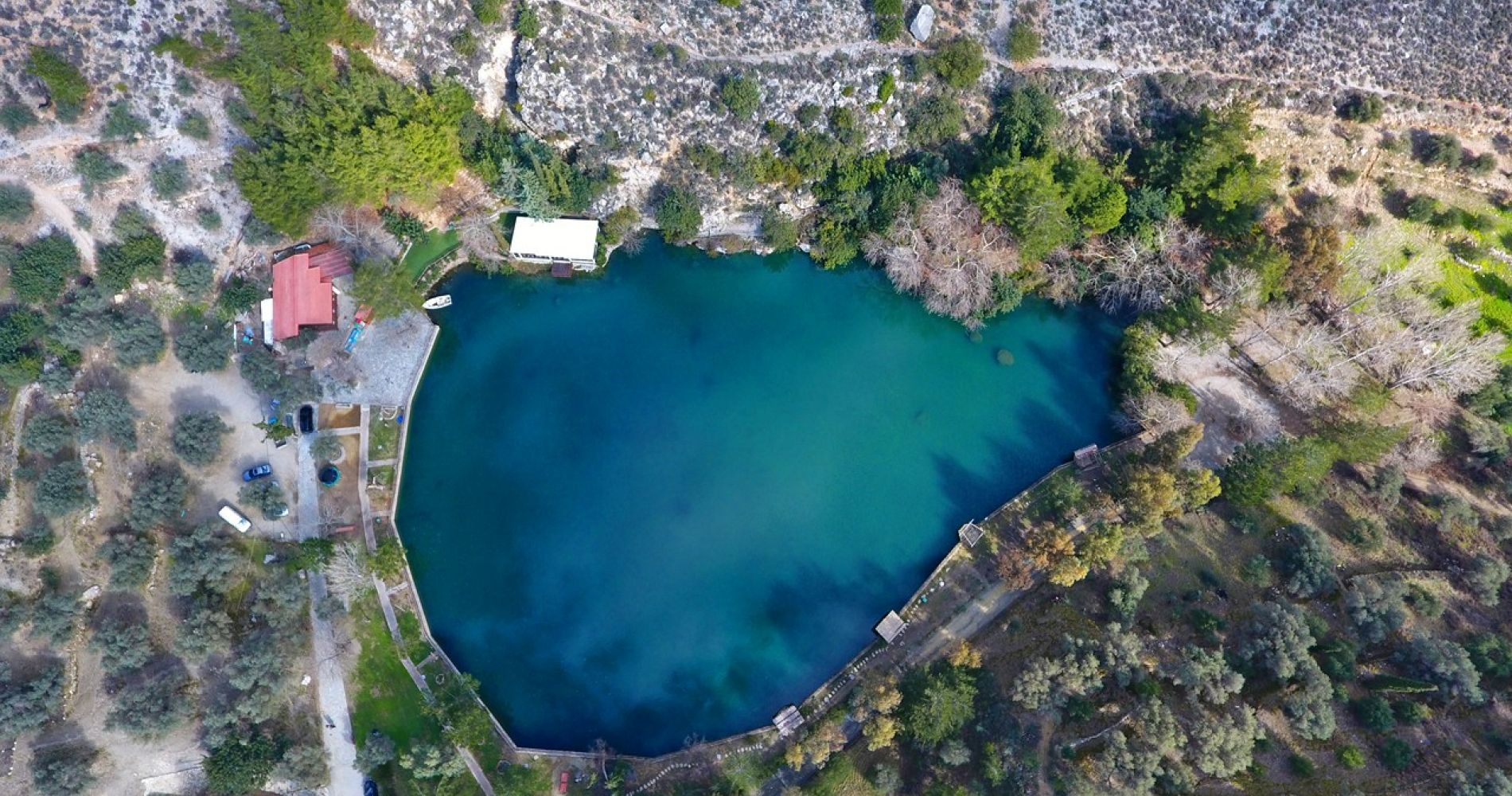